The following is excerpted from Strongholds of Heritage: Forts and Castles of Oman, a fascinating and definitive work on the character, role and legacy of the remarkable forts and castles that are evident of the Sultanate of Oman’s rich heritage. Well-researched, beautifully written and illustrated with stunning photography, this book explores these iconic monuments, a justifiable source of pride to the Omani people and a strong magnet to the ever-increasing number of visitors to the Sultanate.

Khasab Castle, Sentry of the Strait

Separating the Arabian Gulf from the Gulf of Oman, the towering peninsula of Musandam is one of the great landmarks of the world. Its spear-like headland points in the direction of Iran, only a short distance away and once the centre of the great Persian Empire.

Since the days of the ancient Mesopotamian and Indus Valley civilizations, from the third millennium BC, the Strait of Hormuz, a narrow channel between the lands of Oman and those of Iran, has been a busy ocean thoroughfare.

Standing high over this strategic passage at the hinge of trading routes linking the Middle East, the Orient and Africa, Musandam has witnessed important journeys in history for 5,000 years – from the passage of the reed boats of Magan (ancient Oman), carrying copper to Mesopotamia, to the voyage of a contingent of Alexander the Great’s fleet under the command of Admiral Nearchus in 323 BC1, to the conquering ships of the Portuguese in the sixteenth century and present-day oil tankers taking fuel from the Gulf to other parts of the world.

For more than four centuries, a castle has cast its shadow over the sands of Khasab Harbour on the Strait of Hormuz. And this beautifully stationed castle may not have been the first fortification to command the shores and protect the fertile valley leading inland, as there are some signs that Khasab Castle may have been built on the ruins of an earlier indigenous fort.

The Portuguese constructed the fortress at the beginning of the seventeenth century with ambitious plans for dominion over the Strait of Hormuz. But their hopes were dashed when, in 1624, they failed to recapture Hormuz. A quarter of a century later, the Portuguese were expelled from Oman forever and the castle was put to peaceful use, serving the interests of local government.

The castle is built around a large, rectangular open-air courtyard. A handsome perimeter wall made of stones from the nearby foothills encloses the courtyard and joins the four corner towers of the structure. Two stories tall, this curtain wall is crenellated with discrete, rounded merlons and features a wide inner parapet. Three of the corner towers, square in design, acted as keeps and provided strategic overviews of the landward and seaward approaches. In the fourth corner, facing the bay, is a round watchtower with an elevated firing platform and multiple cannon ports. On the ground floor directly inside the northern sea-facing wall, flanking the entrance to the castle, are the original castle kitchens and a number of interrelated rooms currently used for administration, as well as a gift shop.

In the centre of the courtyard is a construction thought to be of great antiquity – a large round tower of unusual thickness. This ancient tower makes the castle distinctive for two reasons; first, because it breaks the classic pattern of placing towers in walls and, second, because it is most likely an Omani building, predating the Portuguese construction, perhaps by a few centuries.

This venerable tower that, in days of old, provided the last bastion of defence, is today an inviting museum with wheelchair access to the top chamber. The tower features twelve exhibits providing in-depth information on the history, geology, wildlife, architecture, art, culture and daily life of Musandam. Among the treasury of artefacts is a fine collection of antique jirz, the small, long-handled axe that has become a central symbol in the heritage of Musandam.

Near the tower in the dappled shade of old trees is a palm-frond (‘arīsh) summer house and a reconstructed bayt al qufl (house of the lock) which blend so well into the courtyard that it seems they have always been there. Elevated on pillars of stone, the ‘arīsh house, an orderly latticework of vertical palm branches, was designed to catch breezes from the sea. These light and airy houses were occupied by mountain dwellers and inhabitants of remote coastal settlements who came to Khasab in the summer to fish and harvest dates.

The ‘house of the lock’ was made virtually impregnable by means of a complex and sophisticated double-locking system. Built partially below ground and made of heavy stone, the bayt al qufl was not primarily a dwelling but evolved as a means of safeguarding vital supplies during periods of seasonal migration. Enormous Julfar ware storage jars (pottery made in western Musandam) were placed on the floor when the foundations of the bayt al qufl had been excavated. The house was then built around the jars, so that they could not be taken through the doorway by thieves, since the door was smaller than the jars. The castle’s bayt al qufl is an authentic structure brought stone by stone from its original place at the foot of the mountains further along the valley and accurately reassembled. Inside are three or four old Julfar ware jars barely visible in the darkened chamber and encrusted with hardened earth.

For a hundred years or so, the castle was the residence of the Wali (local Governor), his family and administration. The Wali’s barza, a room for discussion and consultation meetings, is located on the first floor of the north-eastern tower, along with a waiting room and judge’s chambers. These rooms in what is now called the ‘Wali’s Wing’ have been restored and furnished evocatively in period style with cushions, carpets and antique furniture.

The tower in the opposite corner has been transformed into a library which also captures the atmosphere of times long past. Beautifully framed replicas of old manuscripts hang on the walls. Outside the windows, bright-green Ringneck Parakeets swoop through sun-splashed palm branches. With light flowing through a castellated window, the visitor can settle in at a wooden table and read one of the many informative books on Oman that fill the shelves of this charming castle library.

In the courtyard below are three traditional boats, a battīl, māshuwah and zarūqah from the old fishing village of Kumzar, the farthest outpost on the northern shores of Musandam. The battīl is a graceful boat with a long stem-piece and a distinctive high stern, uniquely decorated with goatskin and cowrie shells on brightly coloured woven bands. Fast under sail, the battīl was traditionally used in the Gulf for raiding as well as fishing, pearling and trading. The zarūqah is similar in design to the battīl but more symmetrical and easier to manoeuvre. Fast and quiet, the zarūqah is used for fishing, sometimes guided by a spotter positioned on the top of nearby cliffs. The māshuwah is a lighter boat originally used for ferrying cargo to and from the large ocean-going vessels that came into harbour.

Another area of the castle, known as the Traditional Wing, is set with scenes of life-size figures enacting a Qur’anic school in session, the dispensing of traditional medicines, a wedding ceremony and women engaged in home crafts. There are tableaux featuring jewellery and traditional silver crafts, along with shelves displaying porcelain and other treasures of the times. In the castle gift shop are fine examples of the crafts of the region, such as the jirz, and clay incense burners from Lima, a small settlement on the eastern coast of Musandam that still produces hand-turned pottery in distinctive traditional designs.

The stark, mountainous peninsula of Musandam, isolated from the rest of the country until the era of HM Sultan Qaboos bin Said by virtue of an inaccessible terrain, now enjoys a modern infrastructure, regular links by air and a high-speed catamaran ferry service direct from Muscat. During the greater part of their history, life for the people of Musandam was extremely hard, but it made them uncommonly resourceful, as evidenced in particular by a unique vernacular architecture.

Now in an age of global tourism, the Musandam Peninsula, with its steep mountain cliffs dramatically plunging into silent bays of pale, shimmering water, is seen as untamed and otherworldly, one of the last wilderness destinations at the edge of time. In this context, the authentically restored castle that crowns Khasab Bay and evokes four centuries of history is a treasure of singular interest.

Strongholds of Heritage is priced at AED 195. 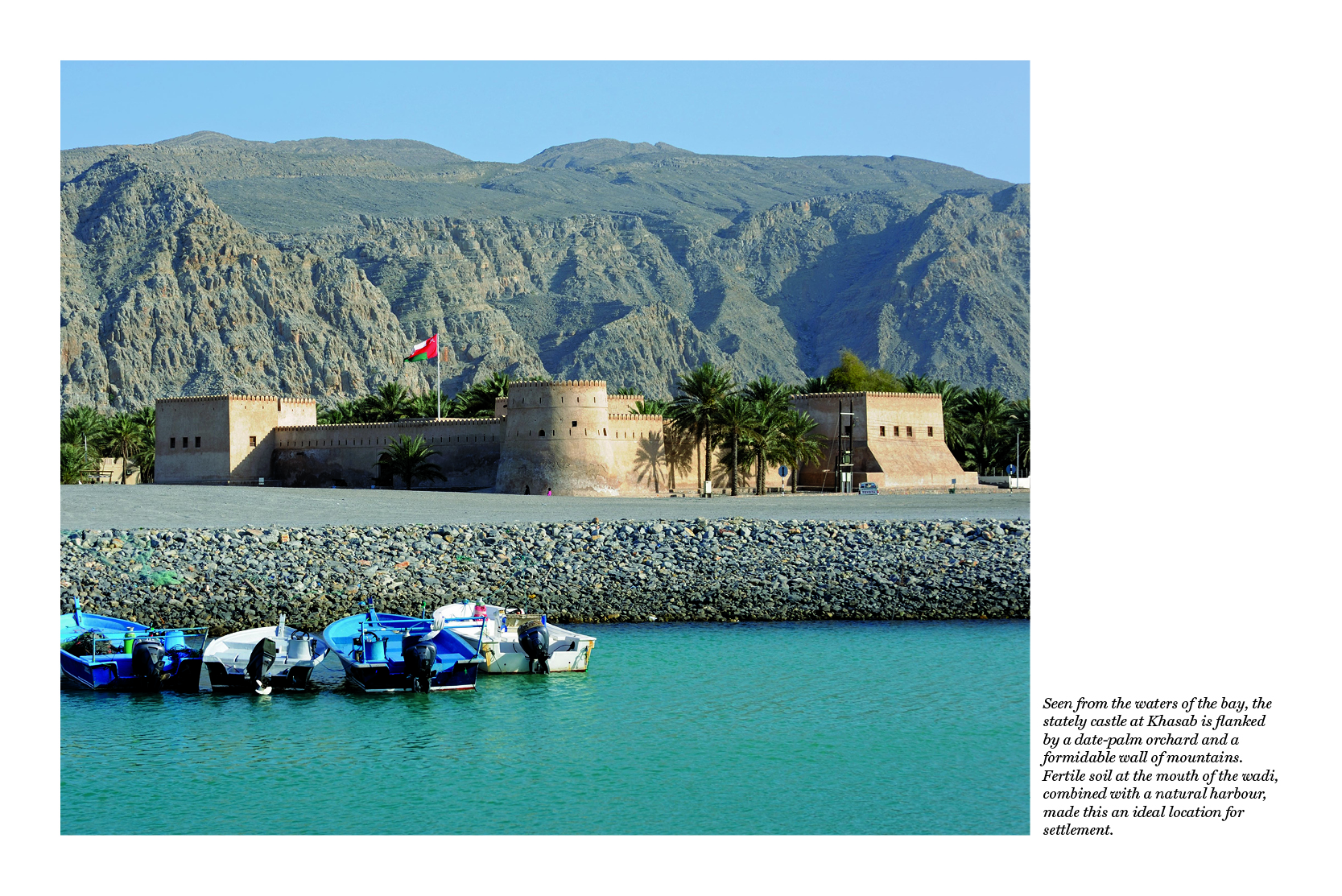 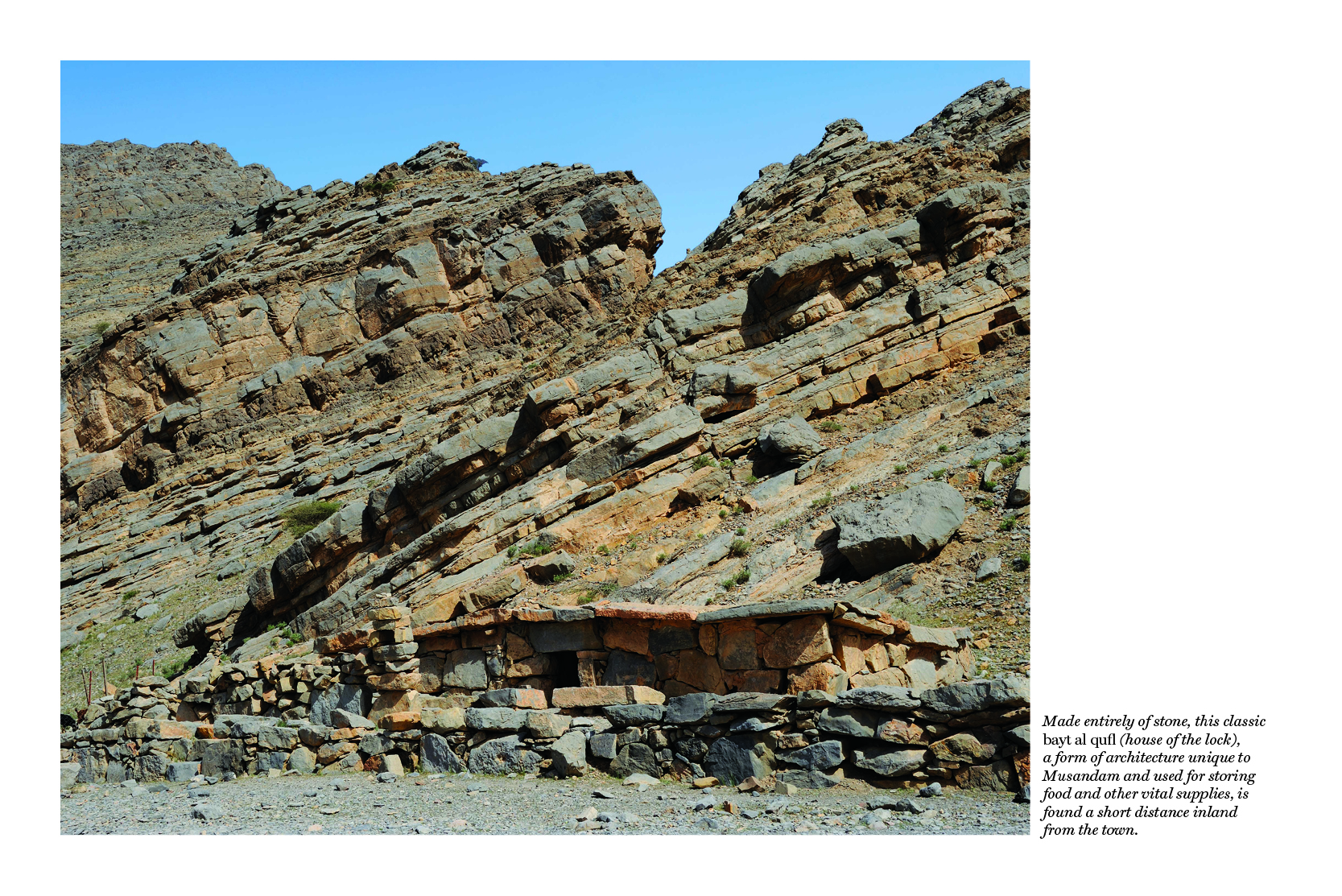 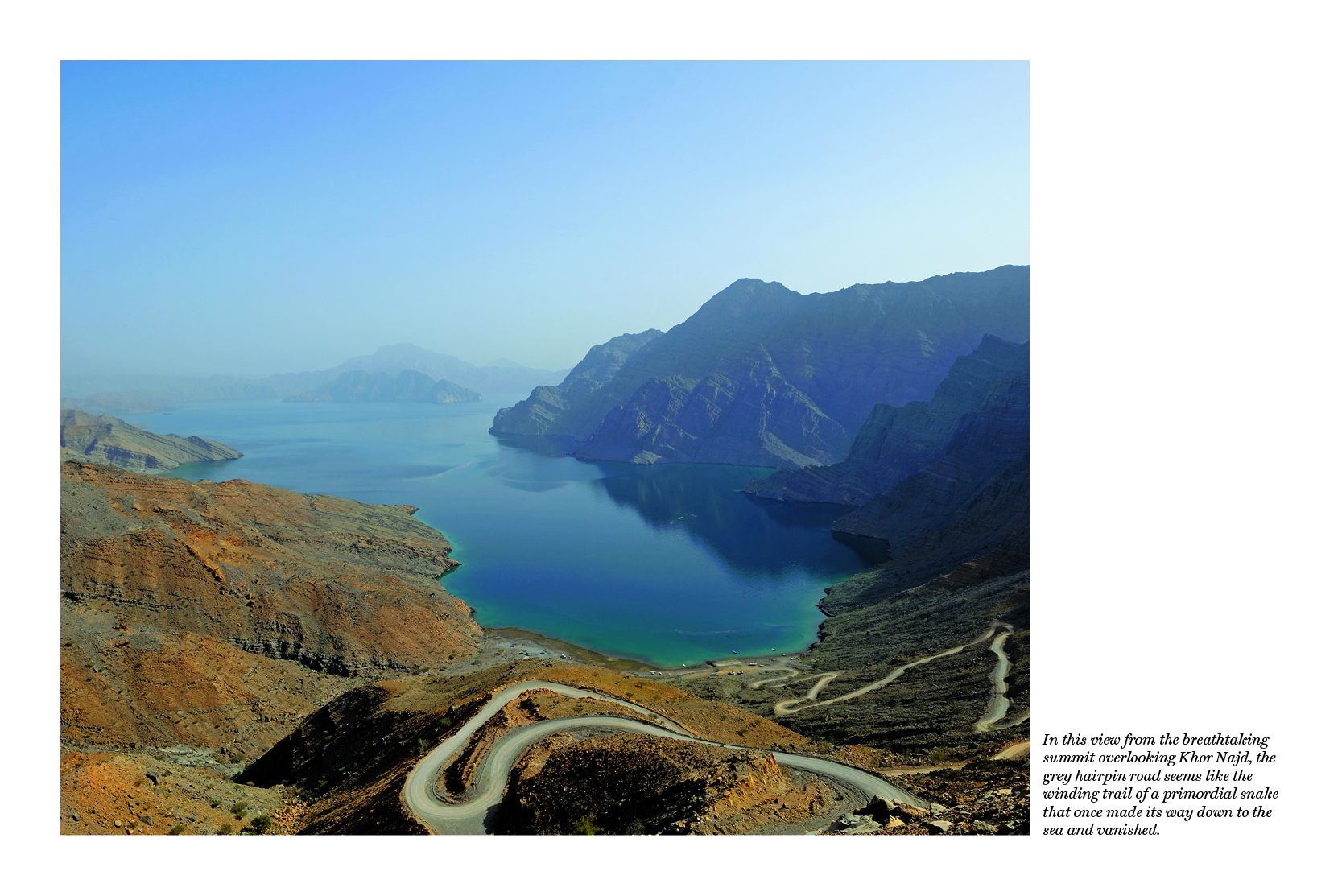 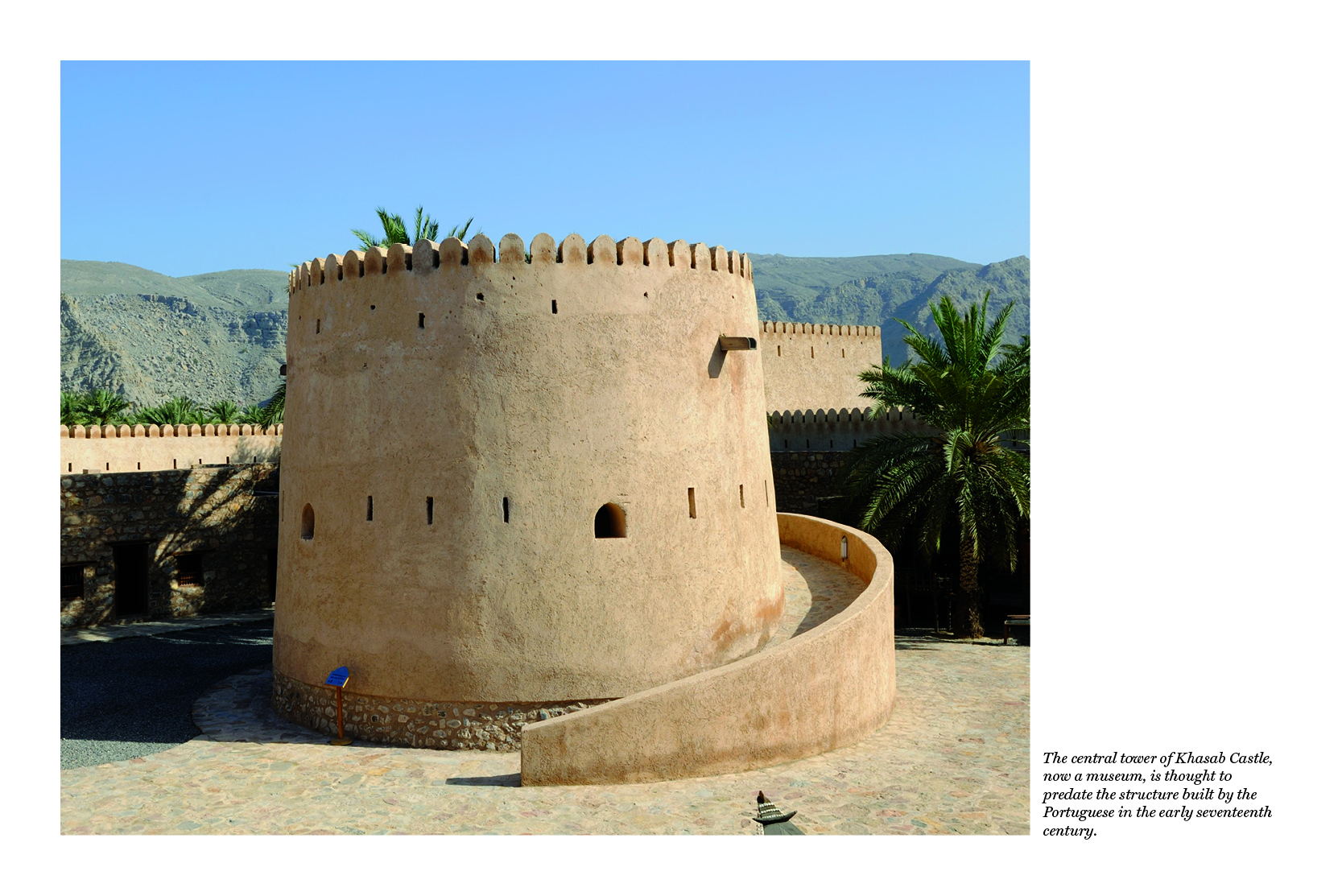 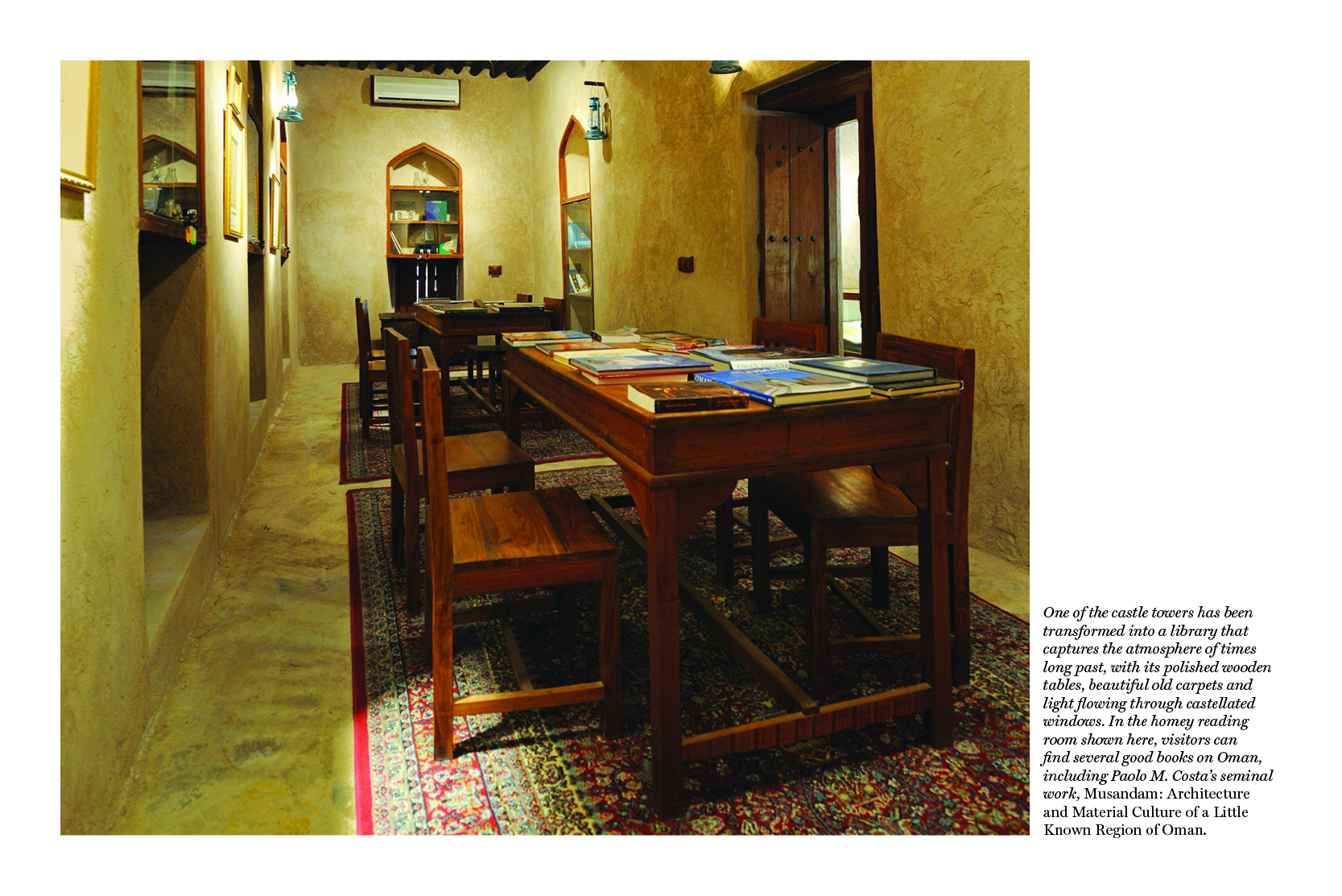 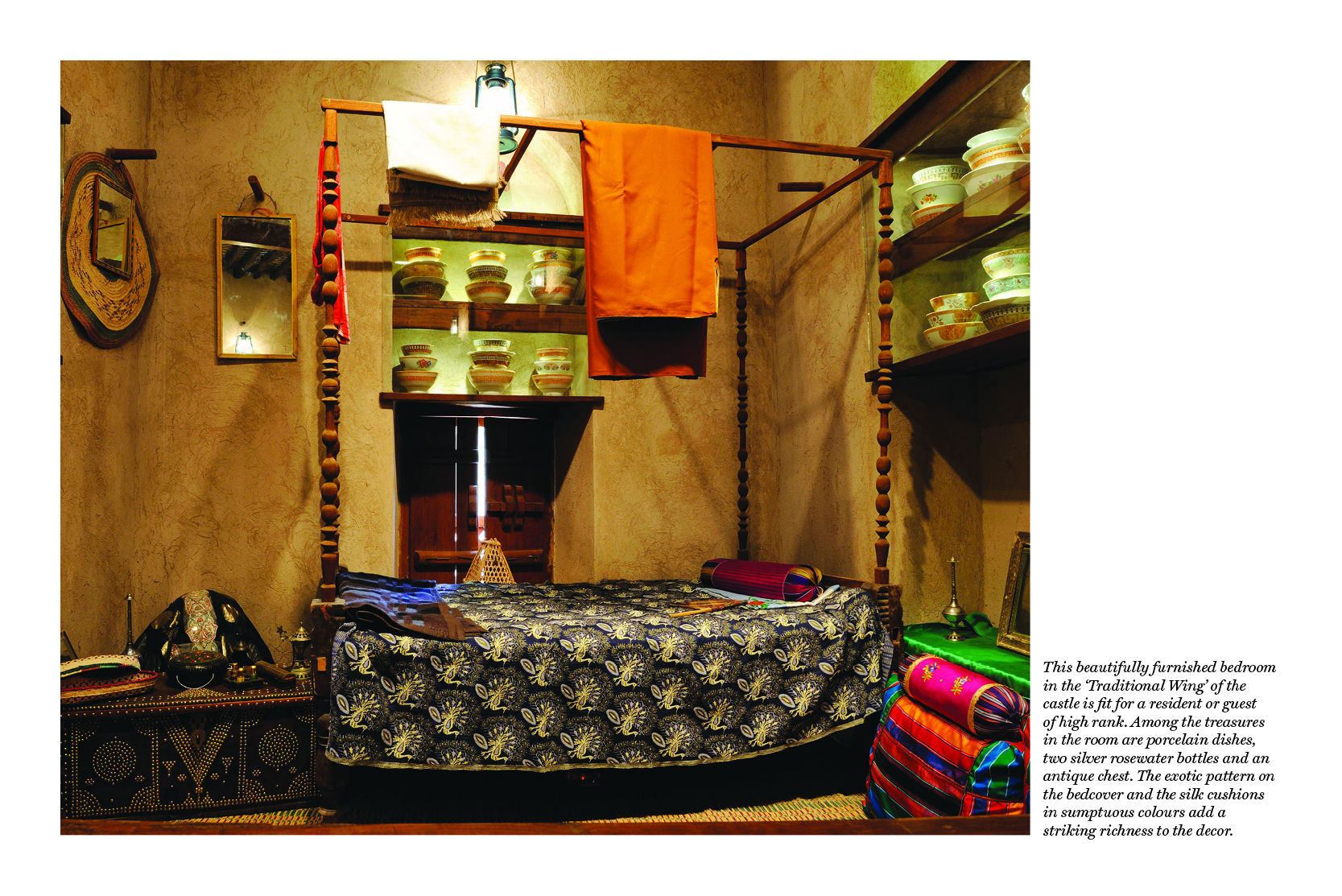