More often than not, reading books in translation helps widen our scope, tap into a different genre of books and get introduced to whole different cultures. So, on the occasion of the International Translation Day that falls on 30 September every year, we have curated fifteen books from Arabic literature that we think you should read.

1. Chaos of the Senses by Ahlam Mosteghanemi
Translated by Baria Ahmar
In the midst of the Algerian civil war, Hayat is a young novelist trapped in a loveless marriage. While her husband, a high-ranking officer, preoccupies himself with politics, Hayat finds freedom from her highly regimented life in the world of her writing. But the line between fiction and reality blurs when she falls for a man who seems to have walked straight out of the pages of her notebook.
Buy it here.

2. Cinnamon by Samar Yazbek
Translated by Emily Danby
After a bitter betrayal, Aliyah is banished from her mistress’ villa and sent back to the dusty alleyways of her childhood. Exhausted, both maid and mistress seek refuge in sleep and dream of their troubled childhoods, loneliness, love and their lives together. This darkly humorous tale portrays the inner world of two Damascene women and their search for security and tenderness from two opposing ends of the social scale.
Buy it here.

3. Girls of Riyadh by Rajaa Alsanea
Translated by Marilyn Booth
Alsanea’s tale of the personal struggles of four young upper-class women offers Westerners an unprecedented glimpse into a society often veiled from view. Living in restrictive Riyadh but travelling all over the globe, these modern Saudi women literally and figuratively shed traditional garb as they search for love, fulfilment, and their place somewhere in between Western society and their Islamic home.
Buy it here.

4. Gold Dust by Ibrahim al-Koni
Translated by Elliott Colla
A classic story of the brotherhood between man and beast where the thread of companionship is all the difference between life and death in the desert. It is a story of the fight to endure in a world of limitless and waterless wastes, and a parable of the struggle to survive in the most dangerous landscape of all: human society.
Buy it here.

5. In the Country of Men by Hisham Matar
Set in 1979 in Libya, nine-year-old Suleiman’s days are full of the rituals of childhood: outings to the ruins surrounding Tripoli, games with friends and exotic gifts from his father’s business trips abroad. However, his nights revolve around his mother’s disturbing bedside stories full of family bitterness. One day Suleiman sees his father across the square of a busy marketplace, his face wrapped in a pair of dark sunglasses. Wasn’t he supposed to be away on business? Why is he going into a strange building with the green shutters? Why is he lying?
Buy it here.

6. No Knives in the Kitchens of this City by Khaled Khalifa
Translated by Leri Price
In the once beautiful city of Aleppo, one Syrian family collapses into tragedy and ruin. The mother, abandoned by her husband, struggles to raise her children alone. Her daughter Sawsan flirts with the militias, the ruling party, and finally religion, seeking but never finding salvation. All are slowly choked in the fog of violence and decay, as their lives are plundered by the brutal regime.
Buy it here.

7. Palace Walk by Naguib Mahfouz
Translated by William Maynard Hutchins and Olive E. Kenny
Palace Walk is the first novel in Nobel Prize-winner Naguib Mahfouz’s magnificent Cairo Trilogy, which trace three generations of the family of the tyrannical patriarch, al-Sayyid Ahmad Abd al-Jawad, who rules his household with a strict hand while living a secret life of self-indulgence. The readers are introduced to his gentle, oppressed wife, Amina, his cloistered daughters, Aisha and Khadija, and his three sons – the tragic and idealistic Fahmy, the dissolute hedonist Yasin and the soul-searching intellectual Kamal. The family’s trials mirror those of their turbulent country during the years spanning the two world wars when Egypt was occupied by the British forces.
Buy it here.

8. Sarmada by Fadi Azzam
Translated by Adam Talib
Sarmada – Arabic for perpetuate or the eternally-not-changed – is the novel’s fictitious setting. In the title, Fadi Azzam creates a new word (a derivative female form of noun-verb, which does not exist in Arabic) and in so doing immediately lets the reader know that women are the protagonists of this story that spans several generations, from Syria to Paris and back again. The novel is set in the Druze area and is a declaration of love for tolerance and for the peaceful coexistence of the many religious groups that live in close proximity. Myths, communists, nationalists, murder, illicit love, superstition, and erotic trees make up the tapestry of this strange, beautifully written novel. Fadi Azzam narrates, just as he writes poetry: Sarmada is direct, ruthless and full of fire.
Buy it here.

9. Season of Migration to the North by Tayeb Salih
Translated by Denys Johnson-Davies
After years of study in Europe, the young man returns to his village along the Nile in post-colonial Sudan. Back home, he discovers a stranger among familiar faces – the enigmatic Mustafa Sa’eed. Mustafa takes the young man into his confidence, telling him the story of his own years in London, of his brilliant career as an economist, and of the series of deadly relationships with women that led to disaster and his eventual return to Sudan.
Buy it here.

10. The Corpse Washer by Sinan Antoon
Translated by the author
Young Jawad, born to a traditional Shi’ite family of corpse washers and shrouders in Baghdad, decides to abandon the family tradition, choosing instead to become a sculptor in order to celebrate life rather than tend to death. He enters Baghdad’s Academy of Fine Arts in the late 1980s, in defiance of his father’s wishes and determined to forge his own path. However, Saddam Hussein’s dictatorship and the economic sanctions of the 1990s destroy the socio-economic fabric of society. The 2003 invasion and military occupation unleash violence and as the corpses pile up, Jawad returns to the inevitable washing and shrouding. He now must contemplate how death shapes daily life and the bodies of Baghdad’s inhabitants.
Buy it here.

11. The Woman from Tantoura by Radwa Ashour
Translated by Kay Heikkinen
This novel tells a powerful human story, following the life of a young girl from her days in the village of al-Tantoura in Palestine up to the dawn of the new century. Ruqayya tries to make sense of all that has happened to her and her family as readers live her love of her land and of her people; and the repeated pain of loss, diaspora, cross-generational misunderstanding, and above all, the indomitable human spirit.
Buy it here.

12. The Yacoubian Building by Alaa Al-Aswany
Translated by Humphrey T. Davies
This controversial novel reveals the political corruption, sexual repression, religious extremism, and modern hopes found in modern-day Egypt. All manner of flawed and fragile humanity reside in the Yacoubian Building, a once-elegant temple of Art Deco splendour now slowly decaying in the smog and bustle of downtown Cairo: a fading aristocrat and self-proclaimed “scientist of women”; a sultry, voluptuous siren; a devout young student, feeling the irresistible pull toward fundamentalism; a newspaper editor helplessly in love with a policeman; a corrupt and corpulent politician, twisting the Koran to justify his desires.
Buy it here.

13. Wild Thorns by Sahar Khalifeh
Translated by Elizabeth Warnock Fernea and Trevor Legassick
A young Palestinian named Usama returns from working in the Gulf to support the resistance movement. His mission is to blow up buses transporting Palestinian workers into Israel. Shocked to discover that many of his fellow citizens have adjusted to life under military rule, Usama exchanges harsh words with his friends and family. Despite the uncertainty, he sets out to accomplish his mission … with disastrous consequences.
Buy it here.

14. Women of Sand and Myrrh by Hanan Al-Shaykh
Translated by Catherine Cobham
In an unnamed Middle Eastern city, four women from different social and cultural backgrounds tell their story. There is Suha, an educated Lebanese woman brought to the desert by her husband; Tamr, who must fight against male rule to educate herself; Suzanne, captivated by the men and the mystery of the Arabian desert; and Nur, in fierce pursuit of lovers and foreign adventures – but her husband has her passport. All four women struggle in a society where women cannot drive a car, walk in the streets unveiled, or travel without male permission. These women are treated to every luxury except that which they truly desire – freedom.
Buy it here.

15. Yalo by Elias Khoury
Translated by Peter Theroux
Yalo is a young man drifting between worlds like a stray dog on the streets of Beirut during the Lebanese civil war. Living with his mother, he falls in with a dangerous circle whose violent escapades he treats as a game. The game becomes a horrifying reality, however, when Yalo is accused of rape and armed robbery and is imprisoned. Tortured and interrogated at length, he is forced to confess to crimes of which he has little or no recollection. As he writes and rewrites his testimony, he begins to grasp his family’s past, and the true Yalo begins to emerge.
Buy it here. 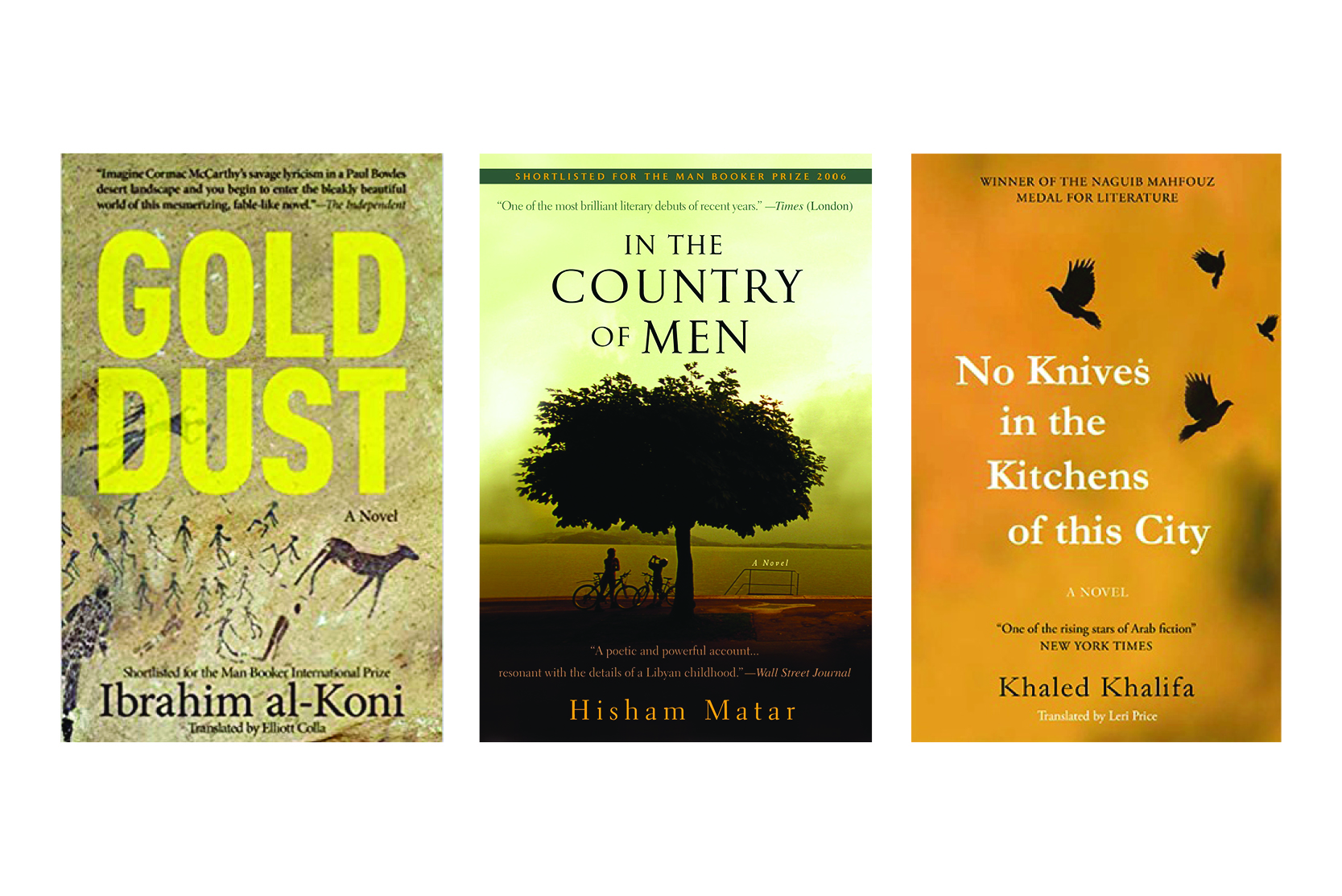 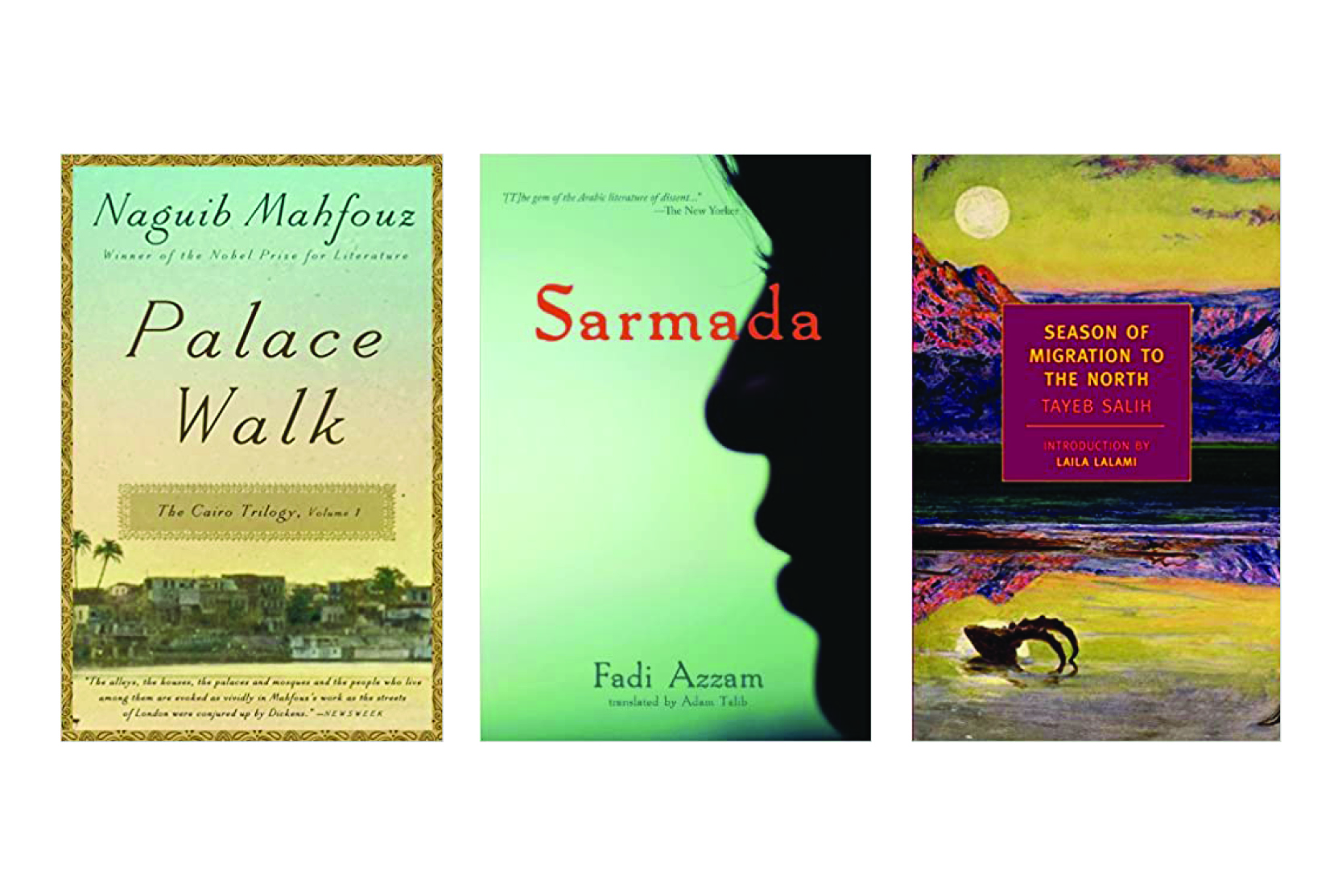 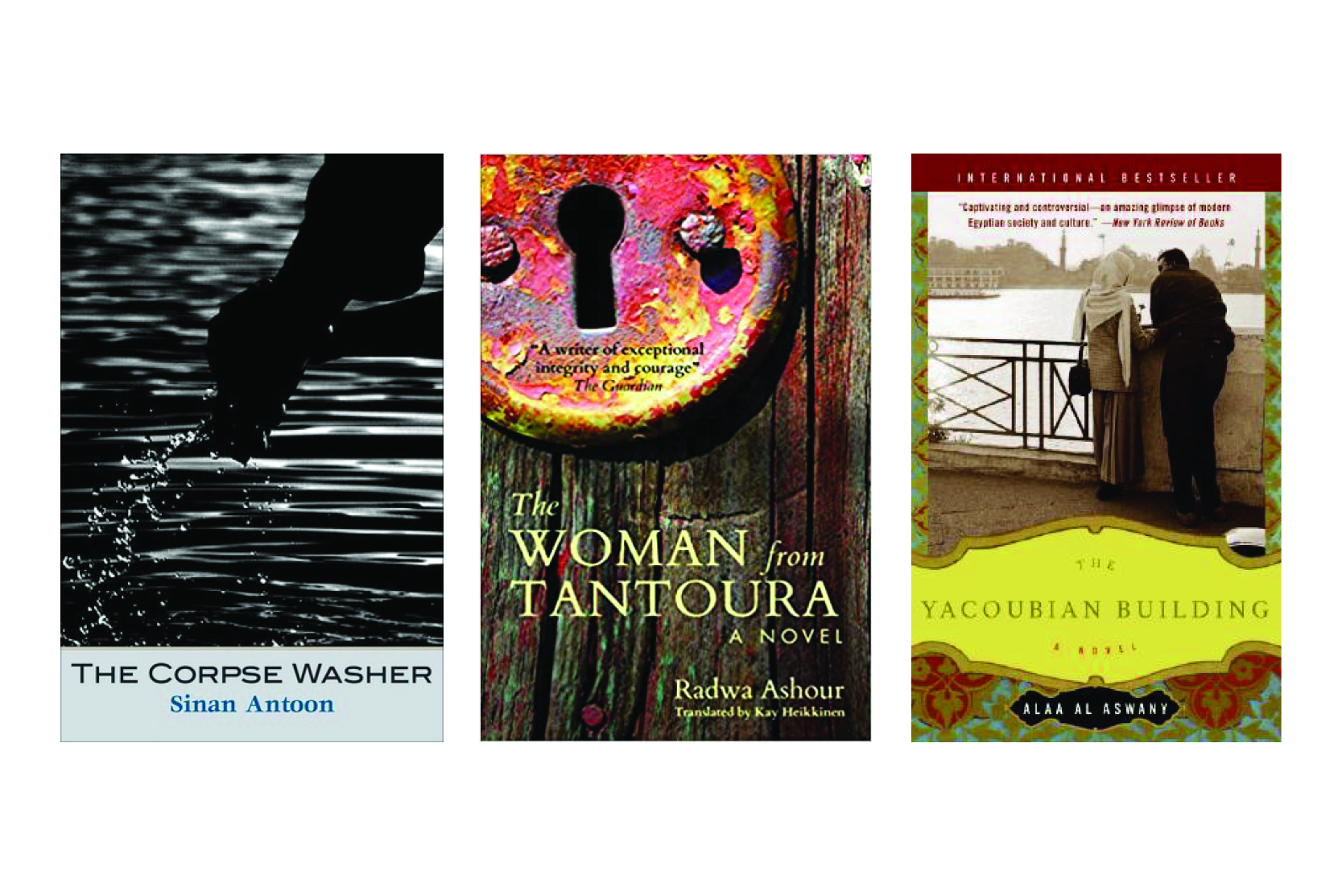 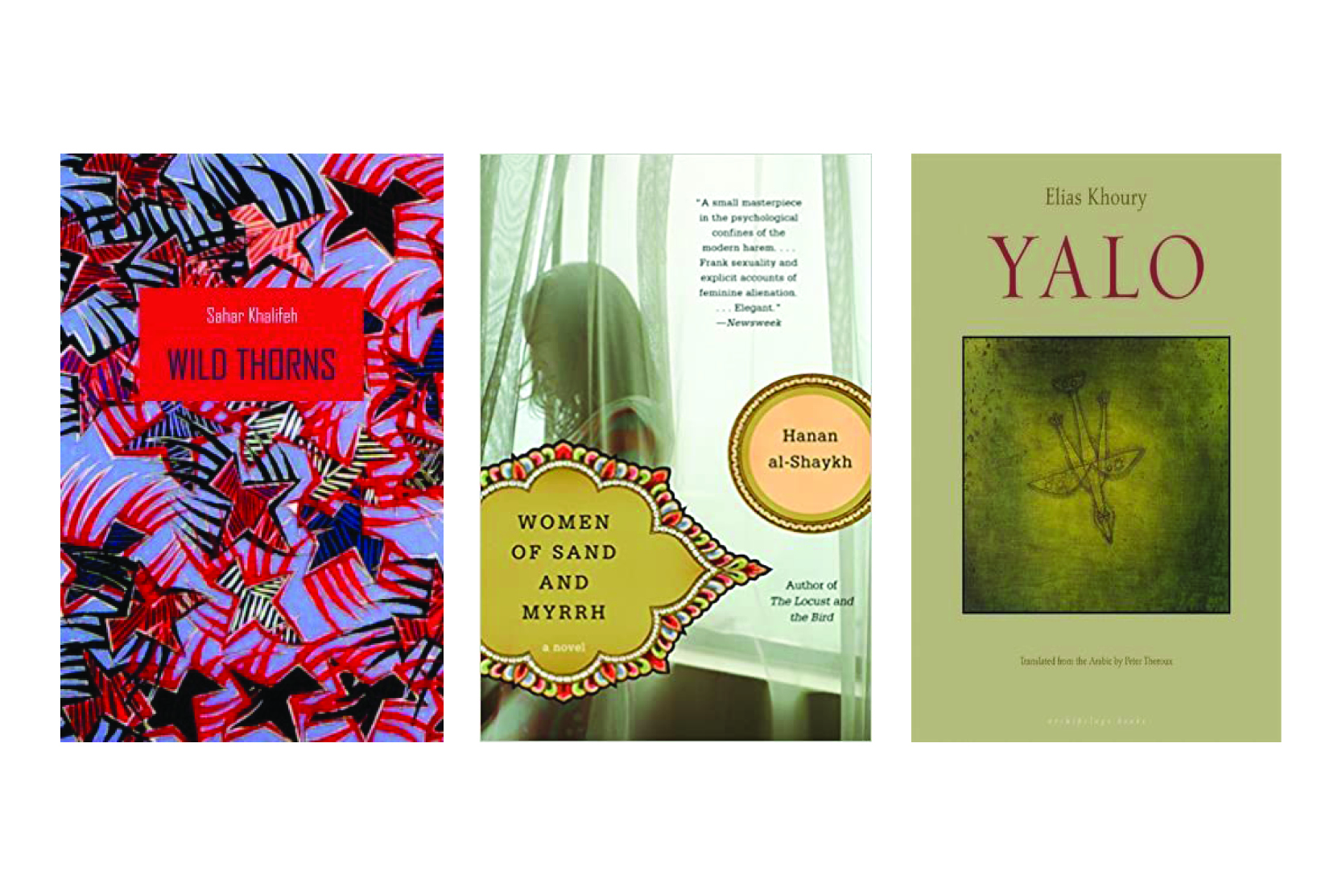