This collection includes three of our bestselling cookbooks that bring together the authentic recipes from all over the Middle East, including the UAE, the Levant, Sudan, Iraq, and Iran.

Our culinary superwomen, Zahra Abdalla, Alexandra von Hahn and Raghad Al Safi have put together delightful and delicious cookbooks with a contemporary take on traditional recipes and with a huge tribute to their family rituals.

Start your own ritual this summer with the family. 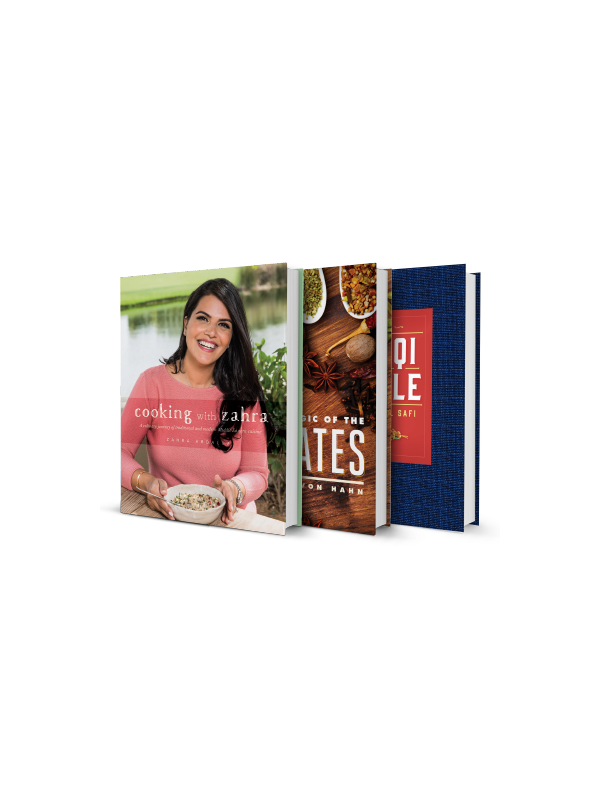 Zahra Abdalla is a half-Iranian, half-Sudanese TV personality and food blogger. Born in London, England, she has lived in various cities across the world, including Khartoum, Athens, Sacramento, London, Vancouver and Toronto, before moving to Dubai. Starting her culinary journey online in 2010, Zahra then presented her own cooking show on My Dubai My City and on MBC 3 and went on to host the fourth season of a travel and food documentary called Maggi Diaries on MBC 1.

Daughter of Baltic-German and Hungarian aristocrats Baron Peter von Hahn-Lieven and Countess Marie Jeanne Sennyey-Szchenyi, Alexandra von Hahn was born in Santiago, Chile, where she lived until the age of 11 after which she and her family relocated to Montreal, Canada. She moved to Abu Dhabi, UAE, along with two children, when her diplomat husband got posted in the capital city. Her creative and enterprising career also has seen her work for the Royal Canadian Mint, establish the Canadian Cheesecake franchise in Berlin and become a Holistic Relationship Coach. She now splits her time between Canada, Germany and the UAE.

Born and raised in Baghdad, Iraq, Raghad Al Safi is a passionate cook who has preserved her Iraqi heritage through her dining table. A civil engineer by training, Raghad also has a background in interior design. From a young age Raghad has found inspiration in the kitchen, and through this book, she aims to showcase the diverse Iraqi cuisine and customs to Iraqis that have left their country, as well as to food enthusiasts all over the world. After leaving Iraq as a twenty-eight-year-old, Raghad lived in many cities across the world, including London, Baku, Vancouver and Amman, before settling in Dubai with her family.